Scotland’s national golf tournament got underway with the Glasgow Golf Event in the sun on Wednesday with companies from the area gathering at the stunning Haggs Castle.

The Glasgow Golf Event was supported by the Glasgow Chamber of Commerce and all the players were in with a chance to win £2,500 for their chosen charity if they were lucky enough to hit a hole in one at one of the par 3 holes.

Each company has selected their own charity cause to play for close to the heart with the Business Fours prize up for grabs final at the National final at the end of May, a prize pot that was over £3,000 last year. Five companies from the Glasgow event booked their place at that national final and it was the 2017 champions, Village Hotel Club who came out on top in Glasgow under the captaincy of Long Drive Champion, Jamie Stevens.

In the individual awards at the Glasgow Golf Event the ‘Nearest The Pin’ bragging rights went to Robert Perrie from ABL Finance, for his effort that led to a 2 on the second hole and on the eleventh hole Alan Whitelock from the Dukes Golf Resort & Spa went closest on the 11th hole. Unfortunately no one managed to hit an Ace on the 7th but with £10,000 for a Hole in One up for grabs at the final they still have a chance of taking home a sizeable prize for their charity.

There was also a prize for the ‘Jekyll and Hyde’ which was the Greatest difference between the outward and inward nine which went to City Building Engineering Services Construction Director, John Connelly who shot an impressive 19 points to finish strongly on the back nine. Adam Barclay from Equator Scotland was the highest scorer from the event on 39 points followed by Craig Maxwell from Mazars who shot a 37.

The Business Fours action continues with further events in Dundee, Aberdeen and Edinburgh before the finals day on the Burnside course at Carnoustie golf links on the 28th of May. Details of the events coming up can be found on their website here 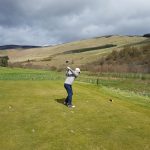